The Bozeman Yellowstone International Airport (BZN) is a convenient and comfortable airport serving the Bozeman, Belgrade, Big Sky and surround areas. It is also the leading airport for traffic coming to visit Yellowstone National Park.

The recent Bozeman Airport expansion has made it even easier to travel to and from the Bozeman, Montana area. Now more flights than ever to more destinations have connected Bozeman to the rest of the country in a way that it never has been before. The Bozeman Airport has grown to be Montana’s busiest transportation hub, now serving over one million passengers annually.

The Bozeman Airport was started over 90 years ago as the Seifert Airport and served as the civilian pilot training program at Montana State University.  After several years of minor moves and planning throughout the 1920’s and 30’s the Bozeman Airport as we know it today was given the green light. In 1940 the Bozeman Airport Commission received official word that Bozeman had been allotted $47,000 in federal funds for construction of a basic airport in Bozeman. The Civil Aeronautics Administration (CAA) financed construction of Gallatin Field in 1941 in order to provide a training school for pilots just prior to World War ll. In 1941, the airport included four runways. At a meeting held at the Baxter Hotel in 1941, it was suggested that a name be chosen for the new airport. The name ‘Sacajawea Field’ was suggested but it was felt that it might be better to choose the name ‘Gallatin Field.’ An airport administration building, designed by Fred Willson, was constructed for $153,000 in 1950-1951. New construction, to meet the growth of Gallatin Field, was made possible by an airport bond issue in 1960.

The 1980s were a decade of continued growth for the Bozeman Airport. The Airport Improvement Program included the FAA providing a maximum of 90 percent of the funding for airport improvements. In addition to runway, taxiway, apron, and access road improvement projects, a 36-foot by 56-foot fire station was built to service the area. This growth continued into the 1990s and included an air traffic control tower which was built in 1997. 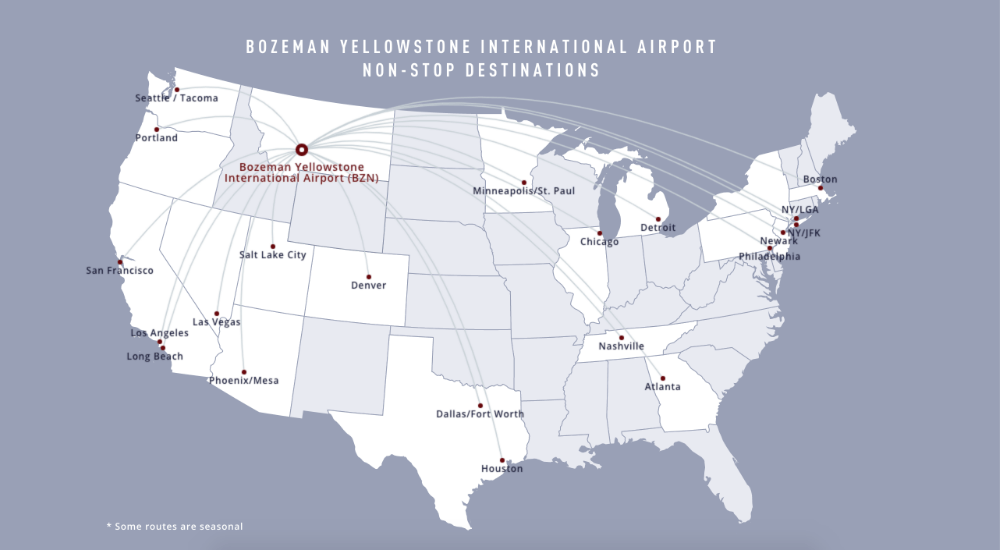 The Bozeman Airports sits on 2,481 acres and is located in Belgrade, MT in Gallatin County. It is located 13 miles from Downtown Bozeman and 45 miles from Big Sky, Montana. Airline carriers serving the airport include: Delta, United, JetBlue, Sun Country, Frontier, Allegiant and Alaska.

The airport is projected to enplane a record 651,078 passengers in 2018, up 8.5% over 2017. Total passengers (enplaned + de- planed) are expected to surpass 1,301,000.
Calendar year 2017 enplanements surpassed the previous record set
in 2016 by 46,327 passengers (the highest net passenger gain in our
history). The increase came primarily due to three
positive air service developments during 2017. These developments
included the American Airlines expansion of Dallas service and addition of seasonal Chicago O’Hare service (300% increase), United’s expansion at four of their six hubs served non-stop from BZN (14% increase) and Alaska expanding their Portland service (Up 49%)
A new parking garage and additional amenities have been recently completed in 2019.